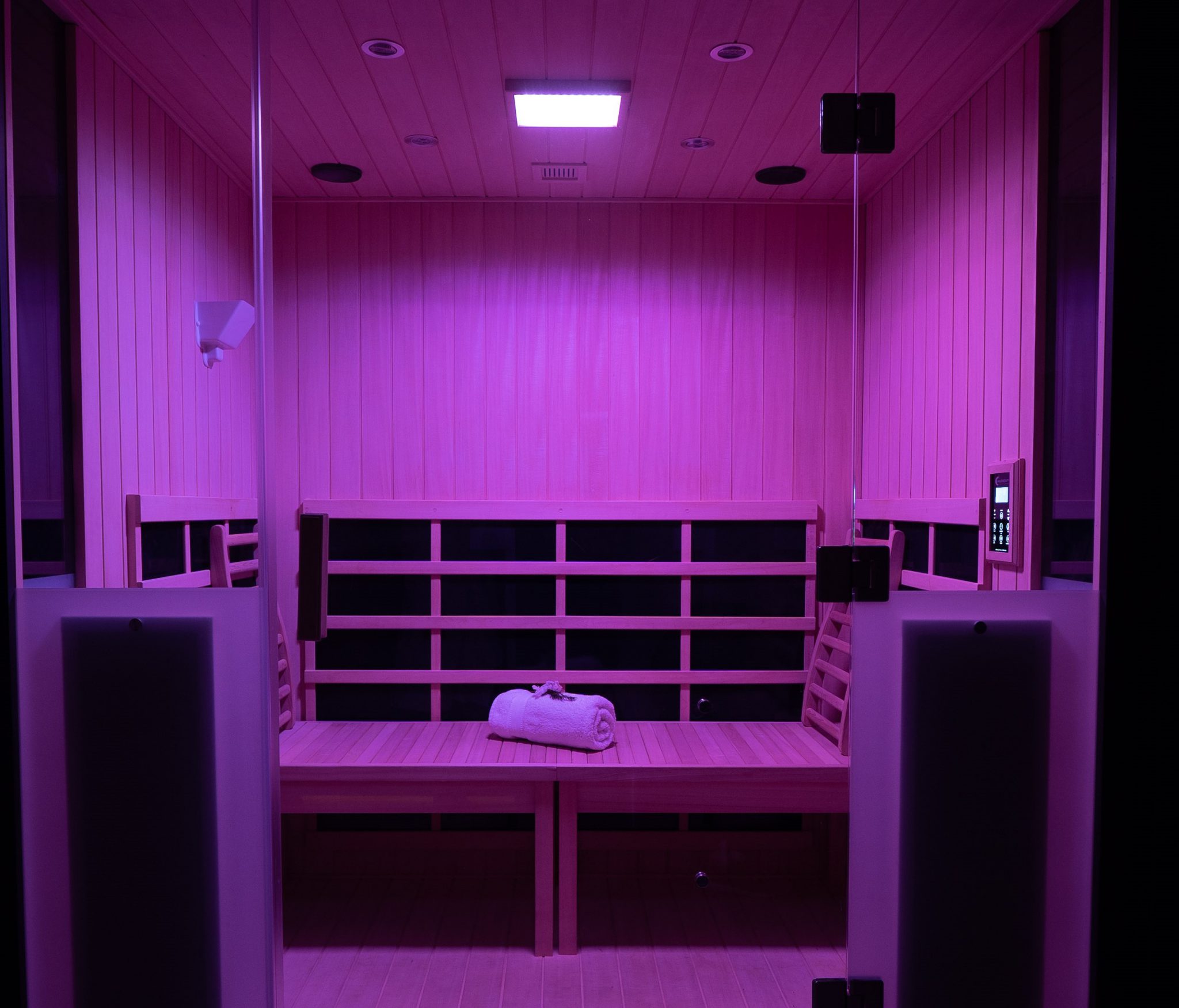 The HaloIR™ is the first sauna to offer a synergistic combination of Infrared heat and Salt Therapy.  It was created to engage all 5 senses for a truly transformative experience.  The benefits of a salt cave treatment and an infrared sauna rolled into one.

The HaloIR™ Infrared sauna heat increases your blood circulation to help stimulate the sweat glands, which releases built up toxins in the body so they can then be eliminated by the liver and bowel.  Regular use of the HaloIR™ Infrared sauna helps detoxify your body as it rids itself of accumulated highly toxic metals such as lead, mercury, nickel, alcohol, nicotine, sulfuric acid, and other organic and inorganic compounds.

The HaloIR™ Infrared sauna increases your heart rate so you BURN BETWEEN 300-400 CALORIES PER SESSION.

As you relax in the HaloIR™ sauna your body is actually hard at work producing sweat, pumping blood, and burning calories. As your body increases sweat production to cool itself, your heart will work harder to pump blood at a greater rate to boost circulation.

This increase in your metabolism will burn calories all while you relax, as well as long after your session ends.

According to the Journal of the American Medical Association, regular use of an IR sauna imparts a similar stress on the cardiovascular system as that of running, and regular use may be as effective a means of cardiovascular conditioning and burning of calories as regular exercise.

What should I wear into the sauna?

It is recommended to wear the least amount of clothing that you feel comfortable with. You are welcome to bring a change of undergarments or bathing suit to wear during the session. It will get sweaty.

How long is a HaloIR Sauna session?

How HOT does the sauna get?

While the salt is generating the sauna will hover around 110-120°, it will not get hotter than this because the salt generator is blowing air & salt into the sauna cabin which keeps the temps cooler. Once the salt turns off (after 20 minutes) the temperature will climb to a max of 140° for the remainder of the session.

Even though the sauna gets up to 140°, we recommend leaving the temp between 120-140. Most people begin sweating around 120-130°. This is where maximum detox & repair happens. Once the body begins sweating that is perfect.

What if I get too HOT?

You will be shown how to control the temperature. If you feel overheated, you can lower the temperature in the cabin or open the glass door to get some fresh air. We strongly recommend you bring water with you during your sauna session.  Proper hydration is essential.

If you are new to using a sauna, it’s okay to shorten the session and work your way up to the full 40 minutes. This is very common.

I don’t like heat, but I want to get the benefits of salt therapy. Is this possible?

Of course! You are welcome to enjoy a salt session only. The cabin heat will be kept at 85° for maximum therapeutic effect.

AKA Color Light Therapy. Colored lights stimulate various responses in the body for wellness. This feature is optional.

Can I bring my phone into the sauna?

Why am I coughing while in the sauna?

Coughing is a natural reflex to eliminate irritants. The salt can trigger coughing which is ok. Salt therapy is great for respiratory hygiene & clearing lungs.

What are the benefits of Halotherapy AKA Salt Therapy?

Halotherapy, also known as dry salt therapy, is an all-natural, holistic approach to healing. A practice that has been around for more than 100 years and medically recognized in Europe for over 50 years. In halotherapy, pure pharmaceutical-grade salt is breathed into our distal airways where it brings its naturally occurring anti-microbial and anti-inflammatory properties to both the upper and lower airways. The particles are also absorbed by the skin.

What are the benefits of an Infrared Sauna?

Infrared saunas can produce the same infrared heat produced by the sun that is required for all living things for optimum health. This radiant heat increases the thermal energy in joints, muscles, and tissues.  When used as intended as part of a healthy lifestyle, infrared saunas may help living well with certain chronic diseases or conditions.

What are the contraindications of using the sauna?

DO NOT USE IF PREGNANT, HAVE METASTATIC CANCER, OPEN WOUNDS, INTERNAL OR EXTERNAL INFECTIONS, RECENT SURGERY OR ANY CONDITION WHERE INCREASING BLOOD FLOW IS NOT ADVISED. 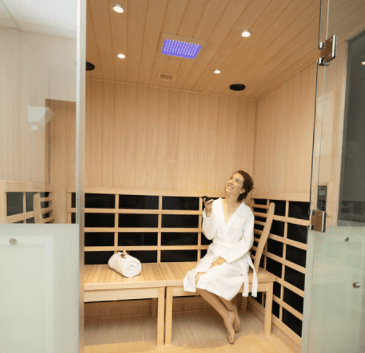 BENEFITS OF SALT THERAPY
Salt has been known for its healing properties for thousands of years. Even ancient writers described many aspects of salt’s positive affects on the body. Salt or halotherapy today utilizes computer controlled rooms to create an environment that promotes respiratory and skin health and healing.

The negative ions of salt absorbed into the body and bloodstream via the skin and lungs during a salt therapy session also help to boost the body’s immunity and resistance to illnesses, improve cell’s metabolic processes and strengthen the functions of autonomic nerves.

Here are the most common conditions treatable with salt therapy, and a brief description of the physiological processes involved in each.

Allergies (particularly Rhinitis or Hay Fever): Various airborne allergies can be treated drug free, with long lasting results. Salt therapy widens the airways of the respiratory tract as micro particles of salt destroy bacteria throughout your sinuses and respiratory system, reducing inflammation in both areas, clearing blockages in the bronchi, bronchioles and sinus cavities, and cleansing your system of airborne pathogens (tar, dust, pollen and smoke) which trigger Rhinitis.

Acute or Chronic Bronchitis (Chronic Obstructive Pulmonary Disease (COPD): Salt therapy in the HaloIR improves your lung function by clearing them of accumulated mucous, making it easier for you to breathe. When mucus is removed, your respiratory tract will widen and clear, eventually putting an end to chronic coughing after large amounts of now mobilized mucous are expelled.

Cystic Fibrosis: Salt therapy brings relief by opening up the respiratory tract, clearing accumulated mucous, and unclogging blockages in the bronchi and bronchioles. Microscopic salt particles also absorb edema from the mucosa lining in the airway passages, reducing inflammation in the respiratory tract. Salt Wellness halotherapy also facilitates the drainage of sinusitis, promoting healing to one of the most common and debilitating symptoms of Cystic Fibrosis.

Dermatitis (including Contact Dermatitis, Eczema, and Psoriasis): HaloIR sessions are a drug free way to find relief from skin irritation, itching and inflammation common to Dermatitis. As you relax in HaloIR Infrared Sauna microscopic salt particles (ranging in size from 1 um to 5 microns) infused into the air, are absorbed by your skin, killing bacteria and fungi and acting as a natural anti-inflammatory.

Emphysema: Salt particles absorb edema from the mucosa lining the airway passages, widening the area and reducing inflammation. This allows blockages in the bronchi and bronchioles to unclog and restore normal transportation of mucous, as well as clearing the respiratory tract from allergens like pollen and tobacco smoke. Halotherapy also destroys bacteria and germs.

Sinusitis: Symptoms are eased by opening blockages to the sinus tract. Salt particles draw out fluid, accelerating mucous clearance and reducing edema of the nasal mucousa, which leads to widening of the airway passages in the nose and sinuses, facilitating sinus drainage. Salt therapy also reduces infection and kills bacteria. With regular treatment, Sinusitis sufferers can expect to significantly reduce their dependence on prescription drugs. 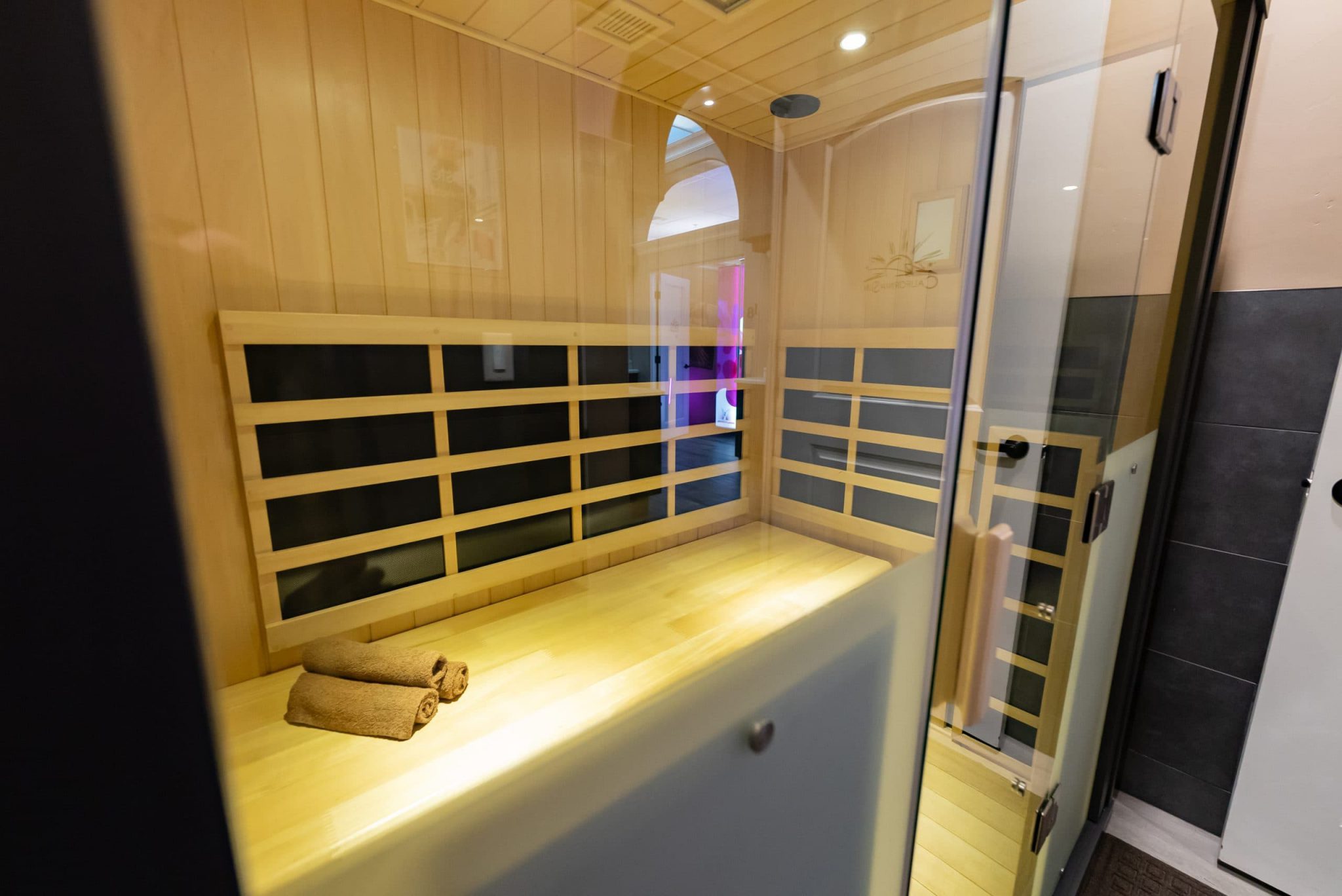